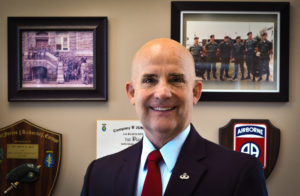 A fifth-generation Texan and graduate of the United States Military Academy at West Point, Keith Self served our nation for 25 years as an Army officer, first retiring from active duty in 1999, then recalled to active duty in 2002 – 2003 for service in Afghanistan and Qatar, serving on General Tommy Franks’ staff.

Keith wears a Ranger Tab, Green Beret Tab, and Master Parachutist wings. As a Green Beret, Keith commended a Special Forces A-Team deploying a man-portable nuclear munition (suitcase nuke) among other airborne assignments. He is a graduate of the US Army Command and General Staff College and holds a Masters degree in International Relations.

First taking office as the Collin County Judge in 2007, Keith and his colleagues on the Commissioners Court reduced the county tax rate five times in eight years, and instituted a homestead exemption. The court also reformed the county pension fund to better protect the taxpayer against automatic contribution increases. The phenomenal growth of Collin County continues and major corporate headquarters continue to find a home in the county, most recently State Farm and Toyota.

Keith has been married to his wife Tracy for 41 years. They currently reside in McKinney TX.